Wendy Kaplan is an Enrolled Agent tax professional living and working in Novato, California.  She grew up in San Anselmo and graduated from Drake High School. She earned a degree in physics from UCSB and spent more than two years in West Africa teaching math as a Peace Corp volunteer.  Later, she worked for LucasArts in San Rafael where she ran the archives and mastering lab. She has also worked as a Finance Manager for local companies in the North Bay area.

While working as a Finance Manager, someone suggested that she might like do tax preparation and recommended some classes at H&R Block. Since they offered a big discount for all their continuation courses Wendy took them all (as well as acquiring her CTEC certification) in exchange for working for H&R for just one season.  She also learned that she loved doing taxes!

She then worked for a local CPA for several years where she was preparing over 200 client returns per season.  This is where she really learned the trade!  Along the way she developed two dreams… 1) Become an Enrolled Agent, and 2) own and operate her own tax practice. 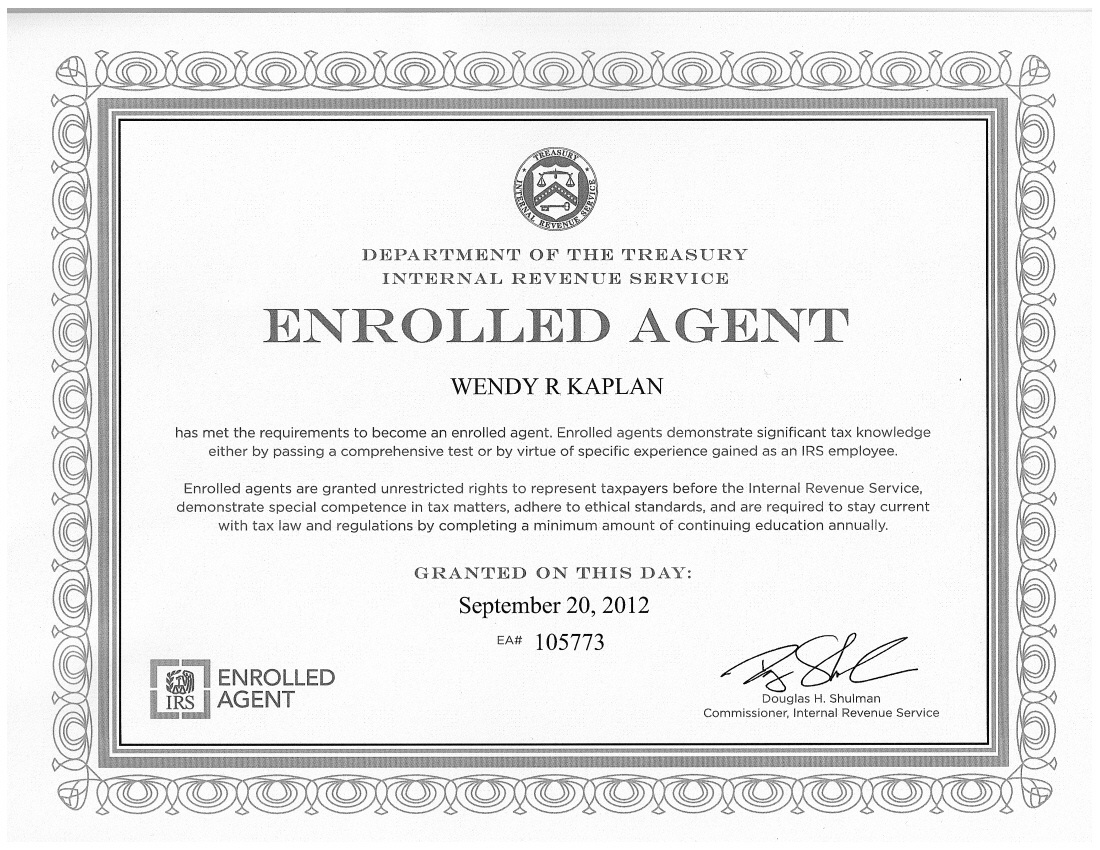 So what’s an Enrolled Agent (EA)? There are mainly two types of tax prep business. The most commonly known is a CPA. CPAs are state regulated and essentially have a broad background in corporate finance, business accounting and tax preparation. EAs, on the other hand, are federally regulated and specialize in tax preparation. Like CPAs, an EA can directly represent clients before the IRS. However, unlike a CPA, an EA can directly represent clients before all state tax boards, whereas a CPA can only do so in their own state.

Enrolled Agent status is the highest credential awarded by the IRS and EAs are considered the equivalent of an IRS employee that “worked at the IRS for five consecutive years in a position which regularly engaged in applying and interpreting the provisions of the Internal Revenue Code and the regulations relating to income, estate, gift, employment, or excise taxes.” To become an EA you must pass three separate 3.5 hour exams. Many people take these exams more than once in order to pass. Wendy passed all three on her first go! Additionally, an EA must complete 24 hours of continuing professional education (CPE) every year.

Mark Cartwright is Wendy’s business partner and acts as office/marketing manager and helps to interface with clients as well as prepare tax returns.  Mark grew up in Stockton and San Rafael, California and graduated from Terra Linda High School.  He has a 20+ year background in entertainment software (games) with companies such as LucasArts and Sega of America; mainly as a staff manager and department head for Quality Assurance groups.  He left the industry in 2012 and now focuses all his efforts on Kaplan Tax.

Mark and Wendy met while working at LucasArts in 1994 and have owned their home in Novato California since 2000. They’ve been married since 2001.